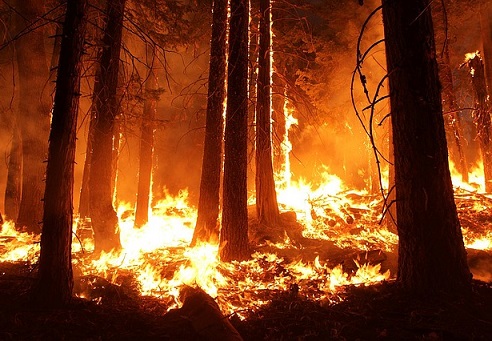 There’s no way of getting around the fact that climate change is making fires bigger and more severe.

Just look to California, where the state’s Department of Insurance reported in January that insurers received claims totaling close to $12 billion in losses from wildfires in 2017.

And the situation is going to get worse, according to new data revealing that wildfires threaten $1.5 trillion worth of homes in the US . Insurers and tech companies are working to mitigate the risks from wildfires, with one start-up using drone mapping software to capture criminals stealing from fire-gutted homes.

But what about attacking the source of the flames with something more effective than water?

“In firefighting, 90% of the water usually falls to the floor or the ground, and runs off and does no work,” said Jeff Denholm, CEO of Atira Systems, the company behind Strong Water. “With our technology, we’re getting it to stick and stay where the heat is, and at the head of the fire or wrapping up around and sticking to areas that are burning. This rapidly – exponentially – extinguishes a fire and sucks the heat out of enclosed spaces faster.”

Strong Water is non-toxic, water enhancing fire-block gel that is designed for use on a firetruck, where it is proportioned into the water stream to produce a thermal barrier that can protect homes from a wildfire before the flames even arrive at its doorsteps.

The product was tested for three years on wildfires through a variety of pilot programs with Cal Fire and fire agencies in San Bernardino and San Diego counties.

The financial impacts that could result from saving thousands of homes and structures mean the product has received interest from a major insurer for potential investment.

“They had profound success using our product in protecting their insured properties on both the Napa and the Thomas fire,” said Denholm.

Using the product, firefighting departments can become more effective since the innovative gel enables them to take preventative measures when protecting buildings from damage.

“Homes and structures that are built in areas more conducive to being burned – where it would endanger their people to put them there – our technology now enables them to go in advance, and apply a protective coating on the structure and then leave and protect those structures from burning,” said Denholm.

“It gives them another tool in their toolbox, and it essentially is allowing them to protect more structures that would otherwise be deemed probably too dangerous to protect.”

The CEO said that the company wants to proliferate as quickly as possible to help tackle the issues in firefighting and protect first responder health, which is often negatively affected by countless hours spent in the profession.

“When you look at our technology, it reduces structural loading and it minimizes the potential of flashover, which is a significant killer of firefighters,” said Denholm. “It’s a tool that we really designed to support first responders and the environment.”